To some, having a desk at the end of their bed might look like a pair of handcuffs. And I totally get that. We all want to wake up and pretend, just for a brief, glorious moment in time, that our lives really do just consist of solo coffee dates, lengthy bubble baths, and perhaps, if we’re feeling particularly motivated, matinee movies.

But if we must work, then we must do what we love (or so everybody likes to muse as though they’re telling you this information for the first time). And the fella that lives here? He’s an art expert, world traveller, and interior designer. Meet Rodman Primack. Or meet the man that leads the life we all wish we had.

Below, a peak at his enviably cultured apartment in NYC, courtesy of Architectural Digest.

Yes, we’ve seen that gnome before… this week’s Wednesday Feast was teasing you and you didn’t even know it. 😉

It’s hard to put your finger on just where in the world his style is coming from. I see Spain, Morocco, France, Belgium, even the otherworldly (I’m looking at you, gnome boy). Yet everything comes together with such clarity. His galleries are a masterfully curated example of this, featuring each corner of the world all at the same time so that we witness one fantastical scene of cultural diversity.

Primack’s playfulness with proportions seems to come naturally to him, too. Where we might expect smaller accents of color, we see paintings, plants, and light fixtures dominating the scene, unabashedly testing our limits.

The result, of course, is an apartment that sacrifices our expectations for relentlessly eclectic fun. Sherlock-meets-Waldo kind of fun. And what’s more fun than that combo?

Hope everyone had a lovely Easter weekend! Does anyone have any family/solo traditions for celebration? I’m really curious because sometimes they’re straight up hilarious/ I would like to live vicariously through you. For the past three years, Easter has been something of a semi-sweet occasion for me. On the one hand, I have the whole house to myself as my roomies flee to their respective homes, and on the other, I just think about how awesome it would be to have my seat back at home, a huge chicken and mashed potatoes filling my plate as my eyes grow four times their normal size in anticipation of eating.

Regardless, everyone seems particularly chipper during Easter weekend. Tulips, pastel colors, maybe the appearance of sun dresses if the weather permits – Easter really just doubles as one big celebration of spring, baby!

Today, I thank the world for photography. Correction, Alice Gao. Because, unfortunately, under the realm of photography is the likes of selfies, and so I can’t say I thank the whole world.

But I’m just gonna come clean and say it – selfies are such a gift. Come on, they’re super liberating. You have all the power in the world to be as pleased as you like with your photo, rather than having your face’s fate quivering in the hands of that stranger at the party who snapped you and a friend out of the blue, leaving you like a couple of deer in headlights with excessive makeup on. (What an image. I enjoy it.)

So on second thought, yes, I thank the world for photography and selfies.

Alice Gao, though, really must be the reigning queen of this world. Or at least for me, on this day, and since I’ve found her. For example, I can’t decide whether or not I’d like to hang the finished painting alone or the photo itself of the painting still dripping from the creative process. As in, with the palette still fresh and the bottles looking as if they have given every last drop of their creative juices to the canvas at hand. And the strips of moody navy, slowly peaking towards the colour the artist was looking for. She makes her photo a piece of art, when it is itself featuring a piece of art. Now that’s ingenuity.

And here, although these flowers look as though they’re fit for a palace or among tight circles serving high tea, the griminess of the sink and the crossing strips of metal on the window serve as a humble stage for the royally strewn stems.

Caught mid-packaging, I see every bit of the efforts we take in creating something beautiful from head to toe for a recipient we care about. Cut string, labels messied about from choosing just the right one, stamps even. It’s as if Gao is floating in and out of our lives and pauses these moments in the most unexpected lights.

Ah. This I adore. The composition has allowed for an immense dark sky to hover over the vibrancy of the flowers, the normalcy of morning tea. But this colour to me is not laden with grief or gloom, but blanketing comfort, lifted just enough so that we can see the light she has captured.

I almost feel as though I’m viewing more so a portrait of a portrait than a scene of an apartment. The framing of this portrait, however asymmetrical, focuses the lady staring right back at us. The to-die-for gold and marble end table elevates her to a point of eye-level, as if we’re about to enter into an enlightening conversation with the woman before us (who I have no doubt has some bad-ass stories to tell).

And oh my golly gee willickers, I just found her blog, Lingered Upon, and I did a helluva lot more than just linger. I think I just moved in unannounced. Here’s a sneak peek of her posts, slash justification of my rudeness:

Just everything about this outfit makes me feel like a savvy, stylin’, successful photographer.

And just everything about this makes me want to just be her for a day. Those boots. That espresso. That style.

There is no greater mystery to me than what on earth to do with the dreaded “miscellaneous drawer”. It’s nearly akin to the goblin that resides in each of our drying machines, who pounces on just a single sock at a time. You know, the natural phenomenon where you take the laundry out, and there’s just one sock left when you could have sworn you put in two. And he takes just one because he’s on a diet, obviously. He’s been painted in a negative light in the tabloids (aka children’s books). And yet so has this miscellaneous drawer, or whatever you happen to call it: etcetera drawer, random drawer, nothing drawer, don’t-look-there-because-it-will-ruin-my-facade-of-organized perfection drawer. The last one really rolls off the tongue, hence its abundant use.

And yet there a few lucky souls in the world who know of no such mystery. Everything is laid out for them, and there is no impending heart attack when thinking about the whereabouts of their tape roll because it was dropped into your miscellaneous drawer aka a black, messy, maybe smelly hole.

Take this beauty of a work space. A desk that is a blend of mid-century classics with a refreshingly modern twist. A glass surface has always intrigued me, and I can’t say I’ve ever worked on one, but I could guess it would feel strangely liberating seeing your work floating above your crossed legs. But more than that, she has displayed pieces that may find their way into your mystery drawer as wall-worthy accessories. That cat mask that you wanted to save (and/or wear in a moment’s notice) is purring. And the punch of happiness in the form of the yellow magazine tray is intended for those old magazines you wish to save, but simply don’t have a place for.

But hey! Maybe you don’t want any of that near your desk. Perhaps your desk is of minimalist nature, and you wish to keep anything miscellaneous in nature away from your zen. Well then just rip your front door off. Okay, a slightly less aggressive option is to simply scout one at an old thrift store (and a more aggressive option is to take your neighbour’s). But see, this is all about different places to stow away your favourite pieces without needing to stick to the predetermined drawers.

Ah, the drop of the jaw that came with this one. I have to be honest – I’m in uncomfortable territory here. There is so much to look at and so much to ogle over. It just reminds me of that crazy aunt who would pinch your cheeks and somehow have a matching wardrobe to her house but then she got a wicked, modern makeover when she ran straight into the wall looking for her cat. This may or may not be the happy result of such an occurrence.

The miscellaneous drawer in my desk during high school tended to accumulate mass amounts of notebooks and textbooks that I dreamily considered looking over before the next year. This, of course, quickly dissipated as my mornings began to prioritize the well-being of my sims over the well-being of my education. Regardless, don’t discard the beat up education drawer, if you will. Clipboards have stormed through the pinterest world.

Take a look at a sweet DIY and a sweet collection of inspiration.

At first glance, one would make the most likely safe assumption that this belonged to a man, perhaps his man cave/office, simply by the dark, cozy hues, distressed brick wall, and sleek wooden surfaces… wait a second, what the heck, those are my favourite things. And let’s be honest. It’s a give away this room is intended for an elegant woman who prefers androgynous clothing with hints of femininity, like a simple black tank with a hint of a lacy bra peeking out along her ribs, or by the ever so dainty collection of flowers spilling out of her favourite, gifted vase.

This lovely lady keeps all of her miscellaneous items by pressing on the third brick from the left wall, and waiting for a pair of magical hands to take them from her while she gets back to living her cool life (or she has no need for a miscellaneous drawer because of her love for minimalism already).

Speaking of magic, let us take a moment and appreciate just how much Harry Potter would not appreciate his bedroom transforming into an equally hidden away palace for organization. But we would all appreciate it, wouldn’t we? For the sake of quality design? Anybody? 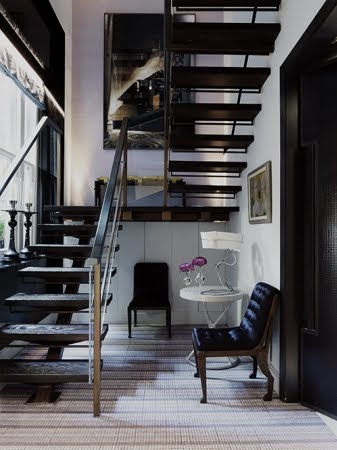 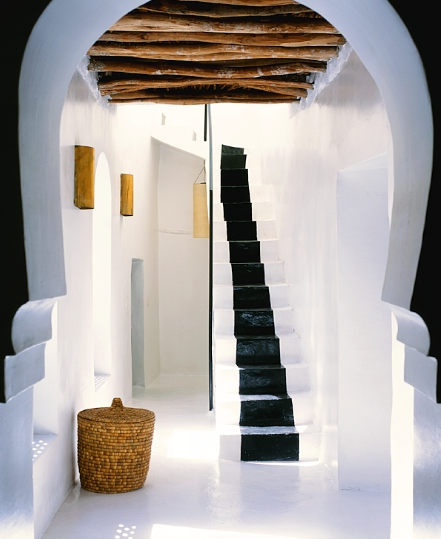 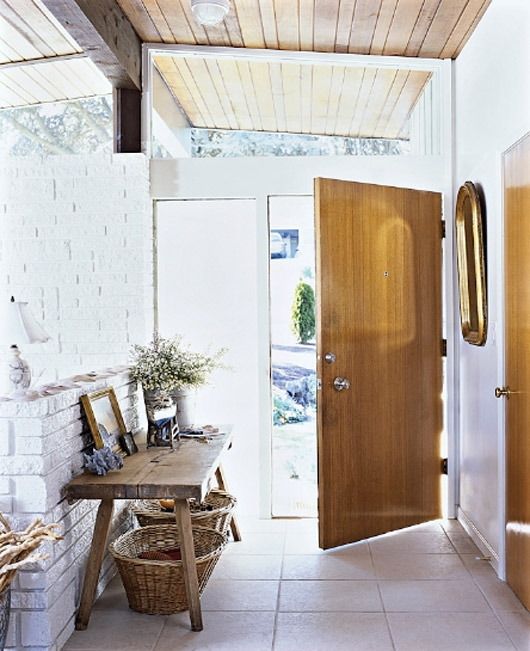 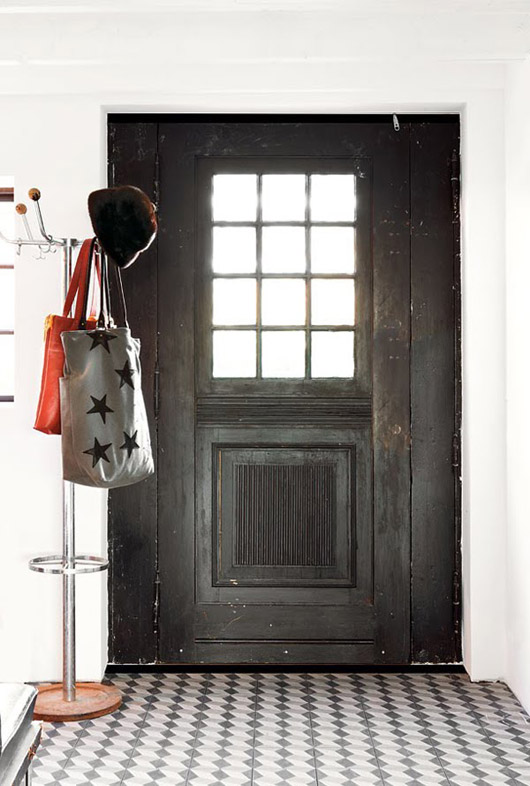 How refreshing are these foyers? Breaking through the molds of the classic, traditional entry ways, these rooms all have a touch of whimsy, a hint of natural light, and some seriously unique details.
*m
{images credited by clicking}