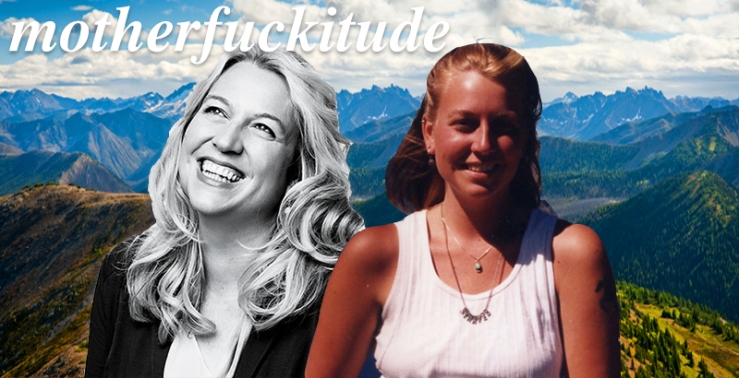 Have any of you seen Wild? It takes Cheryl Strayed (and you, lucky thing) on a journey through the Pacific Crest Trail, encountering revelations at every turn. The best part, though, is that this journey isn’t just through the rained on, sunshined on trees of 27 national forests. And it doesn’t only take you into Cheryl’s sometimes scandalous, often heartbreaking, and perpetually challenging memories. You’re also guided, even pushed, to the crevices of your mind that flourish on doubt, breed jealousy, and infiltrate fear into your thoughts. Through Cheryl’s journey, you take a journey through your own mind as you face flickering questions and uncover answers.

I just read a fantastic (as per usual) piece over at Brain Pickings talking about a little something called motherfuckitude. It comes up in Cheryl’s latest book, Tiny Beautiful Things: Advice on Love and Life from Dear Sugar. Before she wrote Wild and the world was seized by her wisdom all at once, she wrote for an advice column called The Rumpus under the name “Sugar”. Her advice, at the age of twenty-six, speaks to the awesomely wise and unbreakable spirit she has always had.

She never dismisses or deflects the true questions of those pleading for an answer. She digs her hands into the dirt of it. It’s as though she looks at the modest weed people present to her, as though this is all that is irking them or scaring them, and she digs into its roots, unapologetically and necessarily.

I need this book in my possession. I want to say it’s because I’m a twenty something (well, twenty-nothing at this point) who craves Cheryl’s answers to just about everything on a daily basis, intent on finding that glimmering cove in my own mind that points me to them. But it’s not just for twenty-somethings and twenty-nothings. It’s for thirty-somethings and eighty-nothings, and everyone in between and beyond. And it’s not about answers at all. It’s for anyone wanting direction. For anyone wanting renewed inspiration and sharpened humility. It’s for anyone who needs some “motherfuckeritude.”

But being a motherfucker, it’s a way of life, really… It’s about having strength rather than fragility, resilience, and faith, and nerve, and really leaning hard into work rather than worry and anxiety. – Cheryl Strayed

We all need some more motherfuckeritude in our life. Go read about it, and turn this Thursday into a motherfucking Thursday.

P.S. After reading this piece, you may experience a sugar high, a craving for even more sweet advice and wisdom. If so, head over to NPR and check out Dear Sugar Radio, which features the two “original Sugars”, Cheryl Strayed and Steve Almond, “[fielding] all your questions — no matter how deep or dark — and [offering] radical empathy in return.” (I gobble up this podcast at least once a week.)