You know, I became quite fond of referring to my single dorm as my “castle” or, to be more precise, my “500 bedroom mansion.” I repeated the joke a few times, maybe more, and adopted a haughty, noble manner when inviting newcomers into my not-so-humble abode. Instead of walking, I glided, and instead of laughing, I cackled, so as to insure everyone knew the wondrous position I was in. But sure enough, once I went into my own bedroom which was right next to the garbage room and directly above the unloading site for the residence’s junky tings, my humble roots resurfaced. I would settle into my closet-sized room, throw on my not-so-royal bathrobe, and feel more at home than ever.

When my cousin’s little toddler visited once, mystified by how tall my “house” was, she looked at her mum as though she was told that my bad jokes were nearly tear-inducing (which they might be, but hey, they were funny once upon a time, I swear), and said, “But… where are all her toys? And her parents?” (I particularly enjoy the fact that the existence of my toys is the more pressing matter.) But, see, that’s the thing. Even though it wasn’t necessarily the home I thought I’d identify with, there were so many aspects to this actually ridiculously humble abode of mine that made it home (see: stringed lights, favourite birthday cards, deers staring back at me on printed paper, tulips basking in all the sunlight every morning…) that will definitely reappear in what could be considered my first real house next year. We have called ourselves the House Elves (my five roommates and I), and I will now be sleeping on a double bed for the first time in my life, so, to me, that is a taste of the noble life.

So! What does this call for? Virtual inspiration boards, yeah! You got it! Ey! Weo! Let us begin this wondrous, fairy-tale like adventure.

Something tells me that if I were to sit down in front of these two giant deer, people would look upon me as if I were true royalty. Or at least really intimidating and/or wise. Not to mention I would resemble a garden gnome if I wore my pointy red hat because of the size proportions going on (this red pointy hat may still need to be purchased to complete my edgy look).

The House Elves are in need of some practical use of a non-functioning fireplace. So, what better way to take advantage of the fact that we have a fireplace than to use it as a store place for our textbooks! And then, at the end of the year, after our frustration with academia has lit up into a firey rage… we can burn them all. Again, it’s a super practical idea.

That, and I think every fireplace should be celebrated with a giant wreath like structure draped over top of it, and a deer with groovy antlers such as these.

What am I fancying lately? Hand-drawn portraits. Even if they make my eyes look like a fruit fly or my nose like a pleasant piggy, there’s something very endearing about an honest & personal touch to your home. 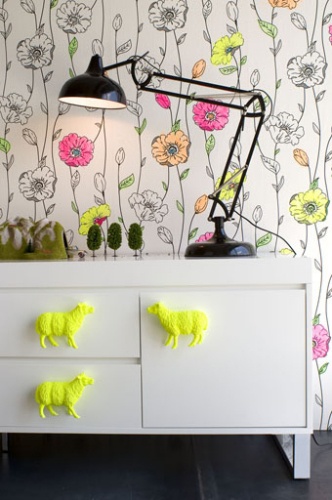 Well, black sheep are cool. And unique from the crowd. But, neon yellow sheep are most likely the original sheep hipsters. Who says all mutations are bad? That, and it has made this starkly minimalist desk into just about the boldest little thing I’ve laid eyes on in a while. 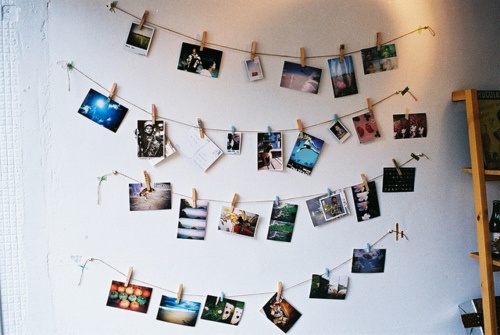 Ah, a classic touch for a house to become a home. I just received a collection of rainbow laundry pins for my birthday and they will definitely be making an appearance in my bedroom this fall.

I am now convinced that anything hanging on strings will probably make its way into my favourite things list every time. A jar with a light inside? Whimsical and much needed in our backyard (or lack thereof, but somehow we will make do). If not? Bedroom it is. Flowers may be equally lovely in an already sunlit room.