Whenever summer rolls around, the same dreamy images float through the fog of my brain. Now this fog is relatively easy to clear up though, so don’t be too concerned about its gloomy presence and/or my health. With each exam checking itself off on the seemingly never ending list of things that had to be completed before I could declare my summer as officially open, the sun would break through that fog and I could suddenly imagine myself dangling on the tip of a sail boat on the open sea. Perhaps dangling is a little too life-threatening. Although a good dangling session on the edge of a sail boat does sound appealing if it weren’t for the fact that I have imagined myself already in a rather expensive and oh-so-breezy summer dress.
Seeing as how what I’m wearing kept coming into play in these day dreams of the exotic nature of my summers, whenever a fashion mag would boldly state, “Meet your summer jacket,” I would immediately direct my eyes to this apparent staple for my summer wardrobe. Until the price tag practically hisses at me, “$525.” Who has that money, yo?! Okay, well, not the starving student I claim to be (please look away from that Starbucks bill).
So this is pretty much a nod to magazines to say that the majority of people who pick up your magazine want to be whisked away into a dream-like state of picking and choosing items for their dream closets… but the dream can only extend so far, and I would like to see price tags that don’t cripple my soul (no hint of melodrama here).

And with that, rant over & happy mother’s day!

Actually, now that Clare Elsaesser’s paintings have made its way into this little post, I should dedicate a few more words to her. It would be a small crime not to, as I would be depriving you all from a taste of graceful talent. The series that first caught my eye were, of course, focused on these beautiful collections of flowers. My eye has become acutely trained to notice any bursts of colour that have so graciously bloomed for us over the next few months, as though they’re trying on a new shade of lipstick and are eager for us all to see their dolled up beauty. We’ll kneel down, place our nose but a few inches away, and just smile and say, “We’re so glad you decided to stop by.” At least that’s how it should be. And I think that’s exactly how these women feel, as they embrace their bundles of flowers as though they were long lost lovers. There’s such a distinct feeling of relief, coalesced with sincere longing and a desire to never unlock their arms. And by hiding these women’s faces, it becomes less of a painting about one woman, but one moment – a moment where love has bloomed all over again and we’re somehow given this privilege to see it all paused, amidst the chaos of everyday when they have rushed to the store and spontaneously – or very much intentionally – purchased a bundle of flowers, or more aptly, found a moment in time to remember a lover. I find it all very beautiful. What’s more, these scenes have a distinctly European feeling to me, and, of course, only in Europe does the term “lover” really seem to feel at home. 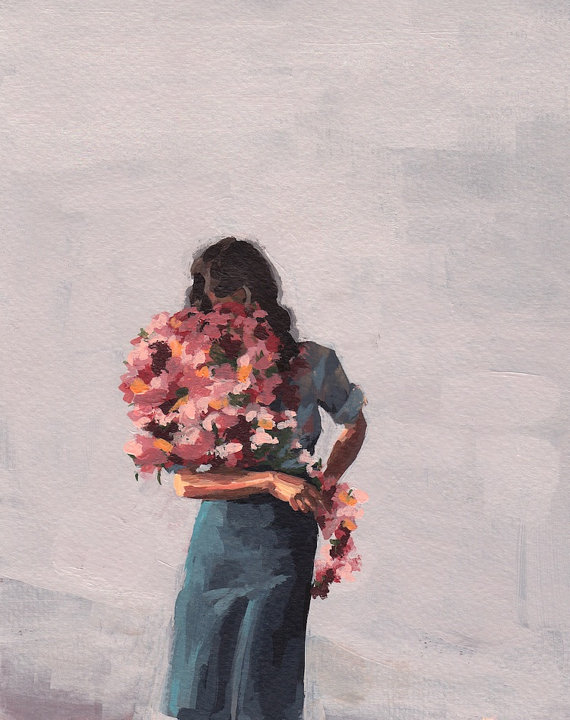 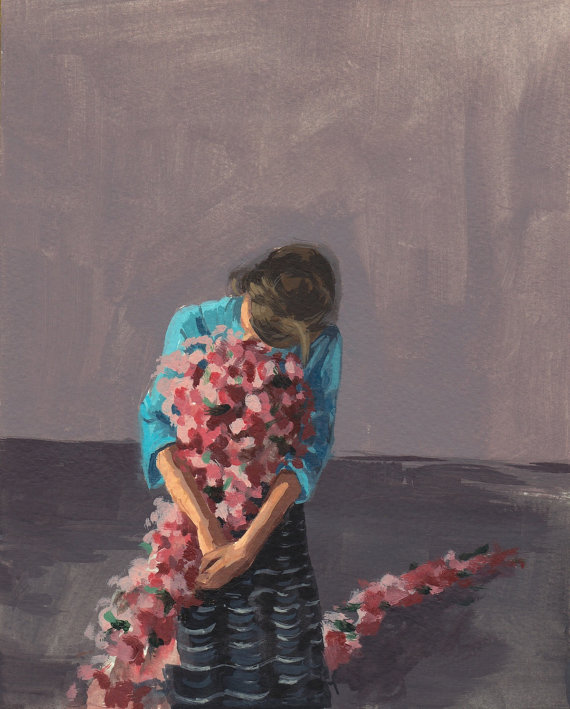 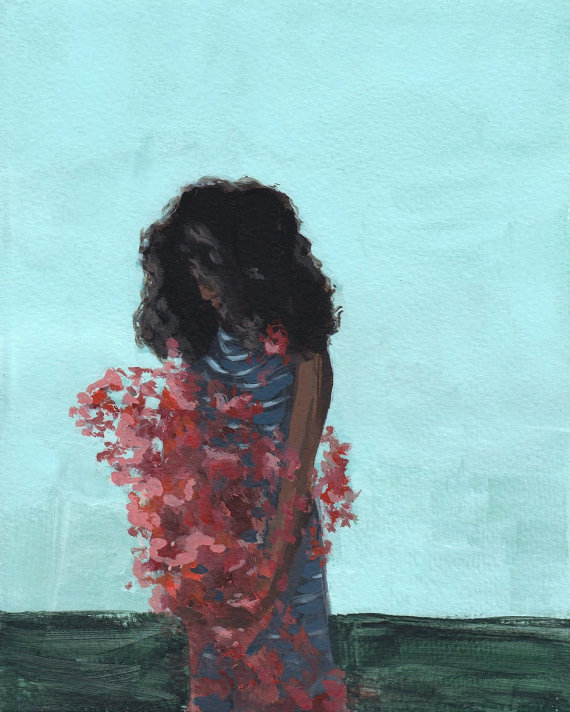 It is because Clare can so gracefully catch the beauty of the moments that are often overlooked that I am drawn to her paintings. I do think that she shares an appreciation for simplicity, made elegant but kept with its raw state. The next series of paintings focus on the quieter moments between lovers, if you will, or, I suspect, of a couple she may have simply passed by on the streets, or imagined herself.

To me, it looks as if this body is radiating warmth from the inside, with these golden undertones finding themselves so much more illuminated against the darkness. It’s as if you’re in the perspective of her lover, and your eyes notice the soft curve of her spine, and the way the light just seems to wrap itself around her. 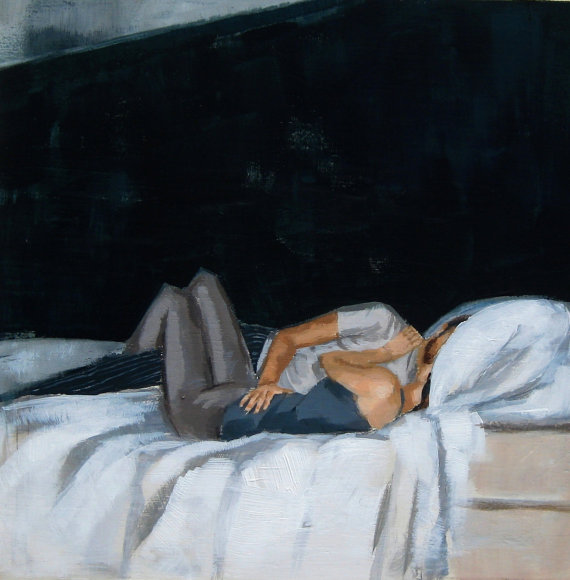 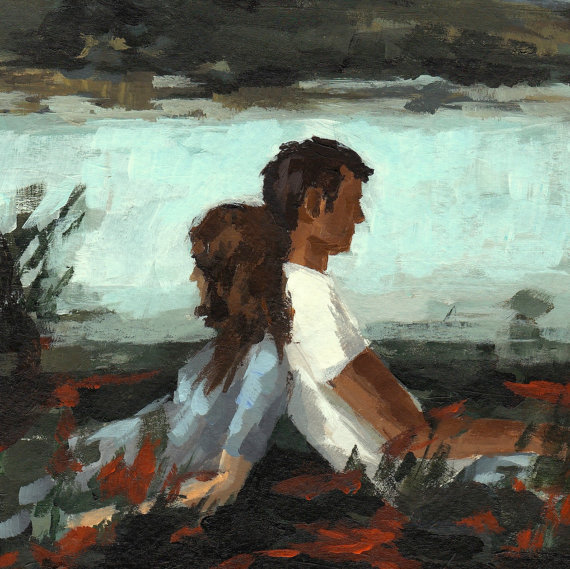 Quiet dependancy. At first, I thought that there was anger between the two of them, with the darker clouds hovering over them as though it hinted at unhappiness, but now I notice the way the woman is slumping into this man, letting herself relax into his back, her body appearing as though it has given up, and I realize that her support system is this man behind her, and he is the only thing that is keeping her from falling.

Again, I love the fact that their faces are hidden, because the emotion of this painting is made clear by the way this woman retreats into his chest, turning her face towards his to sweetly whisper, or just to relish in this lover behind her. Clare captures the light in these block-like strokes, edged along their arms, boldly and unapologetically. It’s as if Clare wants us to realize that she knows that the moments we are sometimes most desperate to freeze in time go by the fastest, in a blur of feelings and touch, and that by focusing more on the way with which the woman finds shelter in his arms rather than the finer detail of her dress, or the flowers surrounding their bodies, we recognize the fleeting nature of these moments we want to freeze, and that maybe they’re not meant to be frozen at all, because the memories are meant to be in the feelings that will inevitably linger in our hearts.
The next series is a delicious dose of whimsy.