I think finding yourself surrounded by everything you’ve created would be such a constant source of inspiration and motivation, too. Although, gotta admit, this really reminds me of the scene from the Black Swan, where she looks into her mother’s studio and the paintings of her all start screaming at the same time. Disturbing timez. 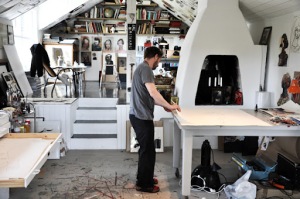 Will never look at Australia the same way. Sorry, Aussies, you forever live on an island shaped as a mouth.

This room is actually insane. And not only because it looks as if it is literally a piece of artwork in itself, just think about the story behind that stained mattress, empty closet, with a wall full of meticulously framed artwork, but because it isn’t real.
Say whaaat?
It’s a miniature scene! Every itty-bitty detail that was thought out for this room just became massively impressive. When I think of how precisely she must have used her fingers, not to mention the star surgeon’s hand she must have had to keep every move so steady, it just boggles my mind. God, I love miniature houses, or just miniature things in general.
Highly suggest you go check out the rest of this gal’s work.
…I can now very realistically see myself as a professional doll house interior designer upon retirement. That and own six dachshunds.
*m